Ropes, Knots, and Wisdom–A Father’s Day Tribute to My Dad 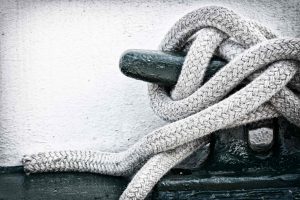 From my earliest memory, my family lived near the water, and as a young boy, I wanted to be just like my dad.  How wise he was—how could he know so many things?  We always had a small powerboat, and, from the time I was little, my dad was always teaching me how to use it.  The ways of the sea, so to speak.

Ropes and knots are a fundamental part of boating lore and safety.  The variety of knots that mariners learned time and again from their own dads vary in form and purpose, and are elegantly spare in design. My father taught me to tie knots from the time I can remember being old enough to hold a fishing pole.

In a way, becoming a man used to be a lot simpler.  The father spent time with his child, dispensing wisdom slowly, one nugget as a time.  The child, a boy in my case, wanted to learn everything.

How do you tie an anchor line?  I remember my dad telling me, “that knot can’t slip, son!”  He showed me the knot to use to hold the anchor firm.  “If the knot slips out, son, the anchor might be lost, and the boat set adrift.  The boat could drift into rocks, and crash against them.  While the boat is at anchor during the night, if the anchor knot slips, the whole boat can drift away, never to be found again.”

When mooring a boat to a dock, I learned the hard way that if you tie the wrong knot (particularly if the water is rough and the boat is heaving up and down), the heavy boat will repetitively jerk the knot so tight that you could never untie it. Instead, you had to cut the whole rope in two.

“Son, here is how you tie a mooring line to a dock post.  If you just wrap the rope around the post several times first, the friction between the rope and the post will hold the boat firm when the swells load up the post.  A very loose simple half hitch, easy to untie, is all that is then required to hold the whole assembly together.”

“Here is how you tie the mooring line to the cleat, son.  Just a couple of loops around and back this way will do it, then run the last loop under the previous loop and loop it back over the cleat again, so the tension from the boat pulling against the post will hold the rope firm to the cleat, but the line will still be easy to remove when we are ready to go back out fishing…”

“Son, this is how you tie a blood knot to add a swivel when using slick monofilament line.  You wrap a lot of loops around the long shaft of the main line, then thread the end back through the hole right above the top of the swivel eye… then tighten up the loops like this…  Do you see how this looks like a hangman’s noose?  Watch what happens when I wrap the line a few times around my finger, then hold the swivel like this [between my right thumb and index finger], and pull down hard.  Do you see how the cinch loops only tighten, and the knot never gets looser?  If you tie your blood knot like this, you are not going to lose your fish, no matter how hard he pulls!”

My dad, still young in his 20s back then, was an able teacher, but I didn’t fully understand how wise he was until I was much older. I learned later that at the time that my dad was first teaching me knots, he was driving his little, tan VW Beetle from our West Palm Beach, Florida home far into the Everglades. Deep in the swamp, he was testing powerful prototype SR-71 Blackbird spy plane engines as a mechanical engineer for Pratt & Whitney Aircraft, at its top secret test facility. “We tested those engines outside on test stands” my dad later told me, “where only the alligators and 5 inch wide rattlesnakes could hear. The shock waves were so powerful, they felt like a man beating you in the chest.”

I think all of those engineers and scientists in the SR-71 spy plane program back then intuitively appreciated knots that would hold fast, and would not slip under load, because they were trying to hold fast an entire airframe as it was pushed to speeds never attempted before.

It was the middle of the Cold War, and Francis Gary Powers had been shot down over Russia in our country’s much slower U-2 spy plane. The engineers and scientists designing the SR-71 engine at Pratt & Whitney in Florida, together with those working on the fuselage in Lockheed Martin’s Skunk Works in Burbank, California, knew that they must now launch our flyboys high and fast, hold fast their ship through tremendous heat and pressure, then bring our boys home safely again.

And fly fast those boys did, at over three times the speed of sound, faster than a 30-06 rifle bullet. No SR-71 mission pilot was ever lost or shot down during this plane’s entire operating life.

As I grew older, those strong, steadfast knots I learned to tie early from my father became metaphors for the interwoven life lessons he later taught us by word and example: perseverance through stress… always protect those you love … practice makes perfect…

Fifty years after my dad taught me to tie those first knots, I found myself standing in Stokes County’s Dan River, rescue rope in hand. I had spent years whitewater kayaking with boaters in and around North Carolina, and had been invited to accompany some Sierra Club friends on their annual novice kayak trip down the Dan near Hanging Rock State Park.

One of the trip participants was having a very hard time that day, could barely walk with a hurt knee, and was very cold after successive spills into the river. I did not think that she could swim, at least I had not seen her attempt a stroke. She was sitting down shivering on a rock bar out in the river. A fast current cut off her route to shore, which was washing straight under a downed log, a mortal hazard that whitewater boaters call a “strainer.”

I readied myself to tie a “bowline” knot into my rescue rope, an open rescue loop which the rescue victim needed to put over her torso and under her arms, so we could pull her to safety. The bowline knot had to hold fast under load, and could not slip, because if it did so it could cinch down tight on the victim’s torso or neck, and asphyxiate her.

The knot did hold fast that day under load, and did not slip. The old mariners’ wisdom had been passed on again, in a way as old as fathers and sons.